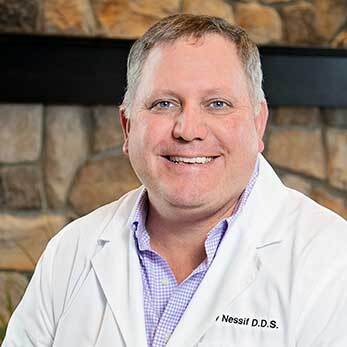 Dr. Peter Nessif graduated from Ottawa Hills High School in 1988 and completed his undergraduate studies and Doctorate of Dental Surgery at The Ohio State University, graduating in 1996.

After graduation, Dr. Peter joined his father, Dr. Terry, in private practice in Toledo. Dr. Terry had started the practice in 1965 and the two have been in practice together ever since.

In his free time, Dr. Peter enjoys spending time with his three children. He is an avid golfer, Ohio State Athletics’ supporter, and music aficionado. Dr. Peter is a past member of the Board of Governors of the Toledo District Golf Association, where he served as President in 2008.

Born in Toledo, Dr. Terry graduated from Thomas A. DeVilbiss High School in 1955 and attended the University of Toledo, graduating with a Bachelor of Education. Dr. Terry then attended The Ohio State University College of Dentistry.

After attaining his Doctorate of Dental Surgery from OSU in 1963, Dr. Nessif became a Captain in the United States Air Force Dental Corp. Dr. Terry was stationed at USAF Hospital, Scott Air Force Base, Illinois  and returned home to Toledo, where he established his general dental practice in 1965. He has since practiced dentistry in Toledo for over 50 years!

Dr. Nessif is an active member of the American Dental Association, Ohio Dental Association, and the Toledo Dental Society. He is a member of the American Academy of Periodontology, American Dental Society of Anesthesiology, National Dental Board of Anesthesiology, The International Congress of Oral Implantologists, and Conscious Sedation Permit State of Ohio.

Dr. Terry is an enthusiastic Ohio State fan with memberships in the Presidents Club and Buckeye Club of the University. He’s also an avid golfer, fisherman, and a Jazz aficionado.

Dr. Terry is a husband, father, and grandfather and enjoys spending time with his family.
CALL TO SCHEDULE AN APPOINTMENT >
Call (567)341-4294
Changing the way people think about dentistry.

"They have provided me and my children with excellent dental care since 1972. They are excellent and gentle. I highly recommend them.."  - Catey M.

"Best dentist in Northwest Ohio! Honest, timely, and caring! My last dentist said I needed six cavities filled. That was ten years ago and Dental Excellence and Dr. Nesiff has never mentioned any cavities only given me praise for the health of my teeth. I trust my health with this practice and so can you!" -Peter T.
More Reviews